There is a common stereotype that Japanese cuisine, in general, is good for you. Life expectancy in Japan is amongst the highest in the world, despite the perceived high-pressure, fast-paced environment in which the Japanese live and work. In fact, as a child, I've always had it in my head that the Japanese diet is hailed to be low cholesterol, low-fat, packed with superfoods and antioxidants etc etc. It's also delicious! You could say I have the best of both worlds, but for the following three Japanese snacks that I absolutely love and are not too good for them hips and thighs...
Inari, sushi rice and mayo 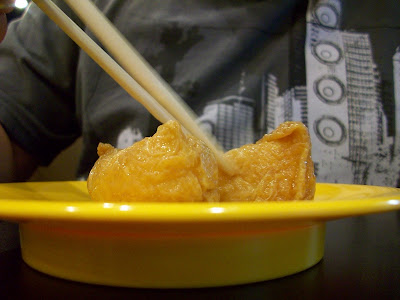 It's a carb bomb and to make matters worse, the inari (beancurd) is soaked in sugary syrup. I don't think it has any nutritional value. Mmmm... did you know that cellulite is the main ingredient of refined white rice? (Yes, I'm a fan of that movie). 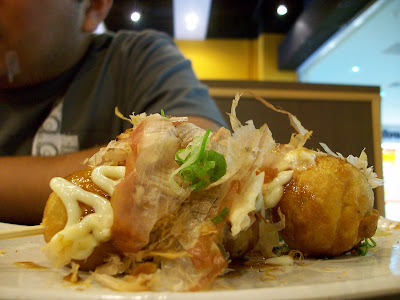 Oh boy do I remember when takoyaki first took off in a big way in Singapore and Malaysia. There were takoyaki stalls EVERYWHERE, thanks to the relatively low barriers to entry and set up costs. All you need is a takoyaki mould grilling machine, octopus, grease, batter, that dried shaved fishmeat stuff (katsuobushi), lots of Japanese mayonnaise and condiments and you're good to go. The smell of the batter grilling is just so yummy. There were lots of variations too if you aren't a fan of octopus: ham and cheese, tuna and chicken being a few of them.

And finally, this. I don't actually know what this is called. In fact, I don't know whether this even exists in Japan. I've certainly seen it in lots of sushi bars in Singapore but I have no clue if it is in fact a localisation. It reminds me of the deep fried Mars Bars in Scotland. Most things deep fried are yummy. Mars Bar is yummy. So by logical deduction, a deep fried Mars Bar is double-yummy. Right?
Same concept applies here:
The Deep Fried Sushi 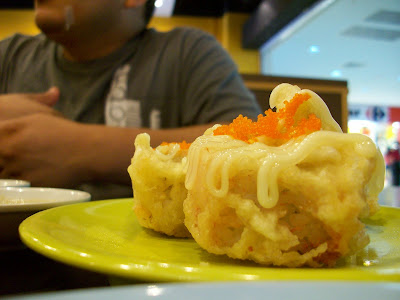 Smothered with mayo and roe, no less. This one was a simple tuna and cucumber maki, dipped in tempura batter and dunked in hot oil. Delish...

Is this one authentic Japanese? Can you find it in Japan?
Posted by Elle Zhang at 18:25